Imagine you have just taken a spill in one of the out-of-the-way canyons in the Superstitions. It wasn’t a serious fall, but you have twisted your ankle and it’s very painful to walk, let alone climb out. Hours have gone by when you hear the insistent sound of a swarm of insects and look up to see a hovering high-tech quad-copter. 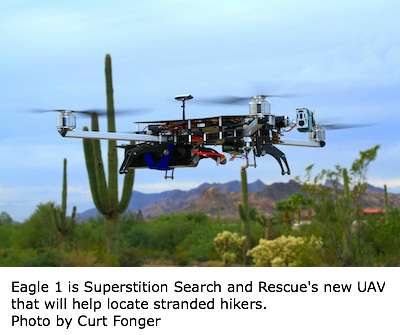 Smile! You’re on camera, and help is on the way. Superstition Search and Rescue (SSAR), a local volunteer rescue group, has added a new tool to help them in their efforts to locate and rescue lost or injured hikers.

“Eagle 1,” SSAR’s Matrix quad-copter, is an unmanned aerial vehicle (UAV) they recently purchased and are now putting through its paces to see how best to use it. It consists of a technologically-advanced system that includes a gimbal mounted video camera on a remote controlled helicopter along with a control unit and a monitor that shows a live feed from the copter. The UAV has wireless connections to six Global Positioning System (GPS) satellites. The monitor displays a high resolution video feed plus grid coordinates of where it is and where the ground based pilot wants it to go.

The battery-powered helicopter can be controlled from 200 yards away during a 25-minute flight time. The benefit to both the search team and those that are lost or in trouble is tremendous. The peaks and deep canyons of the Superstitions can be accessed quicker and safer using the UAV along with searchers in the field, resulting in critical time savings.

Robert Cooper, director of urban searches at SSAR, said that the system can give accu rate directions to help find the person who is lost.

SSAR has had their eye on the system for a long time. “We have been hosting fundraisers and applying for grants because UAV systems used to cost $20,000, but the technology is going up and the prices are coming down,” Cooper said. “We ended up paying just $5,000 for the best system, with all of the upgrades.” Cooper added that it also came with a hat. 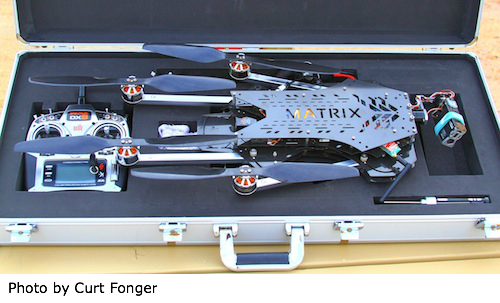 The Apache Junction Elks #2349 raised $2,000 to be applied to the purchase. Dennis Mack, one of the SSAR volunteers who is also in the Elks said that Eagle 1 should be a big help on the trail. “It folds up to fit in a suitcase, which is actually pretty heavy,” Mack said. “But I guess we’ll rig up a harness so it won’t be too hard to pack in.”

SSAR is a private volunteer service organization dedicated to wilderness and urban search and rescue in Arizona. The primary purpose of the organization is to assist individuals who may experience wilderness-related problems including falls or medical emergencies, lost or overdue hikers and heat or cold exposure. SSAR is skilled in wilderness first-aid, technical rescue, orienteering and tracking. These skills enable Superstition Search & Rescue members to safely and efficiently move patients from the field to appropriate medical service in the event of injury, or to their families, in the case of a lost or overdue hiker. You can learn more about SSAR and volunteering at www.superstition-sar.org. 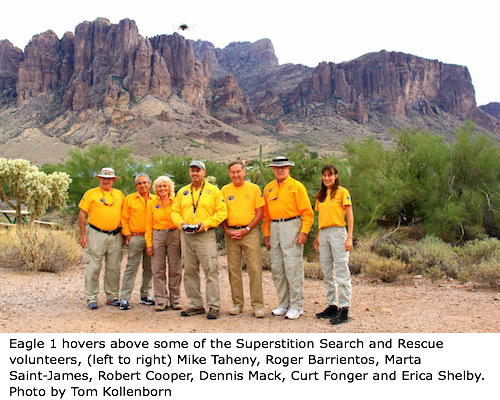 The widow of a rock climber who died on the Superstition Mountains in April is calling out the Pinal County Sheriff’s Office, saying they didn’t listen to information she tried to give them that would have led them directly to her husband.

Tonya Hensley says on April 15, 2013, her husband Chris told her he was going up into the Superstition Mountains to take some pictures that he could show his two daughters.

He texted her a photo of the intersection where he was heading up into the mountains. He then sent instructions to pick him up there.

That was the last time Tonya ever heard from Chris.

As Chris Hensley climbed and hiked up the southwest face of the Superstitions, he carried a new video camera his wife had bought for him.

He also took along a water bottle, his cell phone, a hat and his dreams of getting all the way up, back to a peak known as Flat Iron.

You can hear Chris say on the video he shot as he climbed, “That’s where I was trying to get to.”

He had made the same climb before. With the camera dangling from his waist, the video shows then Hensley encounter loose and dangerous rocks.

His video captures everything from boulders to pebbles as they go tumbling down the mountain at the slightest touch.

Hensley comments, “Oops, this is what you face.”

At the same time, he also marvels at the amazing view he has from the mountain.

“This place is frigging gorgeous!”

Wife Tonya told us someday her daughters will see the video their father shot on his final climb, but she also says she cannot look at it now.

It becomes clear from watching Chris Hensley’s video that he’s losing daylight hours. The video shows he decides to turn around and start the treacherous climb down.

“I would love to hit the tip today but I’m afraid I would be stuck up there til dark.”

Just a minute later he says, “It’s definitely time to go back.”

A few minutes before the end of the videotape, Hensley’s cell phone vibrates and you can see that it’s his wife calling. He doesn’t pick up, and then says, “Not at the moment darling. Sorry to scare you but I have no idea how I’m getting off this frigging mountain.”

Not long after, Tonya Hensley called 9-1-1 and told dispatchers her husband had not returned from the mountain.

It was 10 p.m. and they told her they would send out a search team in the morning.

That next morning, members of the Pinal County Sheriff’s Search and Rescue Team were out looking for Chris Hensley.

“They went out pretty early in the morning, probably around six,” Tonya told us.

But Tuesday and Wednesday went by and there were no signs of Chris.

By Wednesday night, someone from the Pinal County Sheriff’s Office called Tonya to tell her they were suspending their search for the evening.

“That’s when I just lost all hope,” Tonya said.

She says she felt that the Pinal County Deputies she was dealing with were not listening to her.

“I know I did everything I could. I gave them every bit and piece of information I had,” she said.

Desperate to find her husband, Tonya learned about an independent search and rescue team on the web.

She called Superstition Search and Rescue, known as SSAR, an all-volunteer team led by Robert Cooper and Dennis Mack.

They met with Tonya and she says they listened carefully to what she knew about the route Chris took up the mountain.

With that information, Cooper and Mack said it only took them two hours to find Chris Hensley’s body.

Now, they can’t figure out why the Pinal County Search and Rescue Team didn’t find Hensley much sooner.

“With the information they had–they should have gone right to him,” Mack said.

ABC15 asked Pinal County Sheriff Paul Babeu to speak to us about this story, but he declined.

A PCSO spokesperson told us they believe Tonya Hensley gave the men from the Superstition Mountain Search and Rescue Team more information and that’s why they were able to find her husband so quickly.

“Why would I withhold any information? He’s my husband and we have two kids together. We just want him to come home,” she said.

Just a few days after her husband was found dead, she attended a Pinal County Board of Supervisors meeting and she took to the podium to voice her feelings about the way the Pinal County Sheriff’s office handled the search for her husband.

“I was lied to and treated with disrespect,” she told the board. “PCSO was untruthful with me and with the public.”

She points to a PCSO press release that falsely claimed it was the sheriff’s office that found her husband’s body.

Read the entire text of what Tonya Hensley told the Pinal County Board of Supervisors.

In a written response to our questions, a spokesperson for the Pinal County Sheriff’s Office said they have a 98 percent success rate.

PCSO said they devoted 800 man hours to the search for Chris Hensley, but they’ve been criticized for their work in other cases.

In January 2010, the PCSO team spent two days searching for Raymond Churchill. SSAR later found his body in less than an hour.

Dennis Mack told us “You went up to where he ate lunch, you could see his egg wrappings, and you look straight ahead, there’s his motorcycle. You walk straight to it and there he was. It was simple.”

PCSO’s command post was only 150 yards from where Tate’s remains were located.

For nearly 30 years, the Sheriff’s office and the Superstition team worked together and most observers agreed it was beneficial for the community to have the collaboration.

That changed in 2009 when Paul Babeu was elected Sheriff and he restructured all search and rescue operations under one command.

Robert Cooper told the ABC15 Investigators that’s when SSAR chose to cut ties with PCSO because his organization did not have confidence in the training and experience of the commanders Sheriff Babeu put in charge of the unit.

A spokesperson for Sheriff Babeu said the split was due to Robert Cooper’s refusal to submit to a background check but the ABC15 Investigators have verified that Cooper has passed background checks with other law enforcement agencies.

We also learned Coopers team works with the FBI and law enforcement teams from across the state.

Tonya Hensley’s attorney has filed a notice of claim–a precursor to a lawsuit. It alleges a “negligent failure to conduct a competent search.”

She tells us she is doing her best to raise her daughters in a Godly way because that’s what she and Chris talked about before he died.

But she can’t do it living in the shadows of Superstition Mountain. “I don’t ever want to see it again,” she said.

Read an editorial written by Commander Scott Elliott of PCSO about the split between the Pinal County Sheriff’s office and the Superstition Mountain Search and Rescue Team.